Arizona Christian Counseling does not provide or promote conversion therapy. 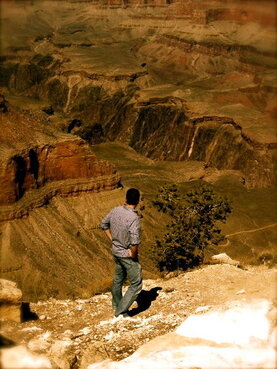 I was born and raised in Phoenix, Arizona and grew up with two sisters and a large extended family on both sides. I come from a loving and close Christian family. I first put my faith in Christ when I was a child and was baptized when I was 12 years old.

Around this time, I entered puberty and started experiencing attraction to other boys. I was terrified. I kept this to myself and planned on going to my grave with this secret. My parents divorced around the same time. I was also bullied a lot in junior high and even in high school. As a result, I become very reserved and withdrawn. It was almost like a dark blackness came over my life.

One thing that helped me to cope was my faith in God. I was involved in Bible Quizzing, a competition for youth where students answer questions about specific books and passages from the Bible. This is when God's Word really began to dig deep into my heart. I wanted to go to a Christian college and chose to go to Asbury University near Lexington, Kentucky.

​Opening Up in College
It was very difficult being away from my family during my first year away. I was still very reserved and withdrawn. My roommate figured out that I was gay and told a friend who went to my home church in Phoenix. Word got back to my parents and they encouraged me to meet with my pastor. The pastor admitted that he didn't know much about homosexuality, but suggested that I start dating women instead. This is exactly what I did for the next ten years.

While in college, I started utilizing the free counseling services that were available to students. Most of the counselors were interns in a graduate counseling program. A few of them tried to help me resolve my same-sex attraction. Even though it didn't work, I began opening up more and found a good group of Christian friends. I became more comfortable with myself, joined student government, and even became class president during my senior year.

Call to Ministry
After college, I worked at my home church running the media and A/V team. One night, a friend asked if I wanted to see a movie. We went to see The Chronicles of Narnia: the Lion, the Witch, and the Wardrobe. I was blown away and felt God speaking to me through the story. I fully surrendered my life to God and felt called to the ministry. My pastor asked me how I was feeling about working for the church. I was honest and told him that I didn't think the teaching was deep enough. He got very upset and asked me to resign immediately. My family ended up leaving the church. I decided to apply to seminary and met a girl while doing street evangelism with a local ministry. We ended up dating for several months. It was intense romantically and we talked about marriage, but we eventually broke up. I found that I could be romantic while dating girls, but didn't feel sexually attracted toward them. In short, there was often smoke but no fire.

Seminary and "Ex-gay" Ministry
I attended Asbury Theological Seminary for one semester but decided to transfer to Wesley Biblical Seminary in Mississippi. I wanted to go to a smaller school where I could really get to know my professors. I learned a lot while in seminary and enjoyed it, but I still couldn't reconcile how I could be gay and also a pastor. This is when I became desperate and tried to change my sexual orientation.

I found a support group in Mississippi associated with the now defunct Exodus International, the largest "ex-gay" ministry in the country. The couple that led the group were very compassionate and I was able to talk about my struggle openly for the first time. However, the curriculum we used was from a group called Love in Action, a conversion therapy residential program based in Memphis, Tennessee. It taught the false assumption that homosexuality is the result of not being comfortable with your gender and self-image. According to the curriculum, it was your job to become "more masculine" or "more feminine" in order to "heal" your same-sex attraction. This is one of the core concepts in conversion therapy. Not only that, but it presents a false gospel of conditional love that depends on how well you perform and don't "act out." I also met with a state-licensed therapist associated with the group who tried to help me change. I attended the group for three years, and while there were some well-meaning people involved, it only drove the shame deeper.

I also tried online "ex-gay" programs, including one that featured an online forum where you could share your struggle with others experiencing same-sex attraction. I was honest and shared that I was currently in seminary. The leader of the group shamed me and implied that I had no place in ministry as long as I continued to struggle with same-sex attraction. I had my first panic attack as a result of this and felt suicidal. From then on, I stopped using this online program.

Back to Arizona
After graduating with a Master of Divinity, I moved back to Phoenix. I worked as a retail manager for two years. During this time, I started meeting with another state-licensed therapist who performed reparative therapy, which is a particular brand of conversion therapy. I went regularly for two years, sometimes weekly. He had me read several conversion therapy books. This is when things really became dark. I wasn't changing and only became depressed and started having suicidal thoughts again. My therapist became impatient with me and didn't think I was trying hard enough. This only made me feel worse. He strongly urged me to sign up for a conversion therapy camp. I paid the deposit and registered for the camp. After telling my roommate about it, he helped me realize that I didn't need to go. He was one of my best friends and accepted me unconditionally. As a result, I ended up canceling my registration to the camp.

One of the things that conversion therapy recommends is spending time with platonic straight friends of the same sex. This is supposed to help a person "resolve" their desire for same-sex love. This is where it backfired. I became close with several straight male Christian friends. My same-sex attraction never went away, but I became more confident in my self-esteem because of their friendship and I slowly started accepting myself.

Full-Time Ministry
After quitting both retail work and conversion therapy, I started getting involved in a church plant. I began working at various Christian organizations teaching and counseling. I gained much of my initial experience in counseling by working through two nonprofit agencies. I also taught on faculty in a teaching assistantship at a local Christian college. Due to circumstances beyond our control with our supporting denomination, the church plant had to fold, and we merged into another existing church. Meanwhile, I started branching out more on my own and founded my private practice and named it Arizona Christian Counseling.

While building my practice, I still remained connected with one of the non-profit agencies and helped the organization grow through my knowledge of media and online marketing. I also started adding more counselors to my own practice so we could help more people. Arizona Christian Counseling grew by leaps and bounds and I became involved with AAPC (The American Association of Pastoral Counselors). The colleagues I met through AAPC were very warm and receptive toward me. I felt safe opening up about my sexuality and even told them about my experience going through conversion therapy. I also joined an LGBTQ-affirming United Methodist Church. Around this time, I started going to therapy again, but with a legitimate LGBTQ-affirming psychologist. He encouraged me to start coming out to more people. It was scary, but lessened the shame every time I did it. I started dating men, but was looking for a relationship. I tried using online apps but was disenchanted with the  dating scene, which seemed to focus more on one-night stands. I finally met my boyfriend and we have now been together for over a year and a half.

​Fired for Being Gay
One weekend, while I was on vacation, I received a text message from the director of non-profit agency. He wanted to talk, but I asked if we could wait until I was back from vacation. He was insistent and I ended up calling him. He told me that he had listened to some podcasts I produced that covered LGBTQ issues and Christianity. In the podcasts, I took a middle-of-the-road stance in presenting various views on the topic. The director then asked me if I was gay. I was taken aback, but decided to be honest. I told him the truth and the fact that I have been in a committed long-term relationship with someone of the same sex. He became frantic and said we could no longer work together. I told him how I repressed my sexuality for many years and even went through several years of conversion therapy to try to change. I mentioned that my sexuality had no impact on the years of work I had done for the organization, but to no avail. After I told him that I was in a committed long-term relationship, he immediately fired me. He invited me to follow up with him again after I returned from vacation.

I was pretty dejected after the phone call, but realized the injustice of it. I decided that I needed to record the second phone call in order to protect myself. The director reiterated everything from the first phone call and admitted that though my work was excellent, my sexuality was the issue. I have never understood how religious liberty can be used to justify hurting other people. This goes against Jesus' commandment to love others as oneself, and goes against the whole point of Jesus' parable of the Good Samaritan. Sexuality aside, what about my own religious liberty? What about the faith of LGBTQ people? Why is one person's religious beliefs more important than someone else's?

My relationship with Christ is the thing most precious to me. For too long, many people have tried to take this away from me. They've told me that I'm bound for hell unless I change. That I cannot be a Christian unless I lie and pretend that I am straight. That I don't deserve to fall in love or to get married. That I am disqualified for the ministry. I realize now that the reason God never changed me was because there was nothing wrong with me. God has guided me this far. I pray that I will continue to be used for God's purpose. Below, you can see my coming out video and more of my story: